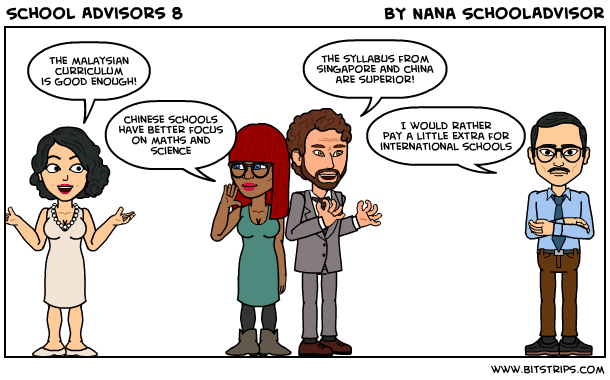 Independent Chinese Schools offer a combination of the curricula used in China and Taiwan along with the Malaysian national curriculum. A lot of Chinese schools also import curriculum from other countries such as Singapore. While Mandarin is the main medium of instruction, Bahasa Malaysia and English are used extensively in the schools.

The United Chinese School Committees Association of Malaysia (UCSCAM, the association of Chinese school teachers and trustees (?????????????) also known as Dong Jiao Zong (???) coordinates the curriculum used in the schools and organizes the Unified Examination Certificate (UEC) standardized test. Despite this, the schools are independent of each other and are free to manage their own affairs.

Since these independent schools are not directly administrated by the MoE, the rules and regulations are different from government schools. USCCAM is the boss here. They do have their own unified exam system (an exam which all the independent schools took part), just like SPM and STPM. Also, a very distinctive feature of an independent school student is their uniform, which for boys are full white top and bottom instead of dark green trousers for boys in gov school.

Students usually spend 6 years in a Chinese Independent High School. The 6 years are divided into two stages: three years in junior middle and three years in senior middle, similar to the secondary school systems in mainland China and Taiwan.

In independent school, the class rank differs from the Form system used in gov schools. Here, Form 1 to Form 3 students are called as "Lower 1 - Lower 3", while Form 4 to Form 6 are called "Higher 1 - Higher 3". Like other schools, students are able to decide whether they'll stop their study in Higher 2, which equivalent to Form 5 in gov school, or to continue another year at Higher 3 level, which is almost the same as Form 6.

Students are streamed into tracks like Science or Art/Commerce in the senior middle stage. At the end of each stage, students sit for the Unified Examination Certificate (UEC). A few schools offer an additional year in senior middle, catering to students taking the government's Sijil Tinggi Pelajaran Malaysia (STPM, equivalent to A-level).

Don’t forget to LIKEus on Facebook and receive updates and consultation on all matters related to Private and International schools in Malaysia.