What is the DLP and why is it important?

The Dual Language Programme (DLP) is a programme under the government's initiative to 'Empower Bahasa Malaysia and Strengthen English' policy. The programme has been initiated at selected Malaysian primary and secondary schools in 2016.

With its core purpose of giving students the opportunity to use either English or Malay in Science, Mathematics, Information Technology and Communication, and Design and Technology; the DLP is expected to boost English proficiency in government schools, as well as enhance students’ future employability opportunities. 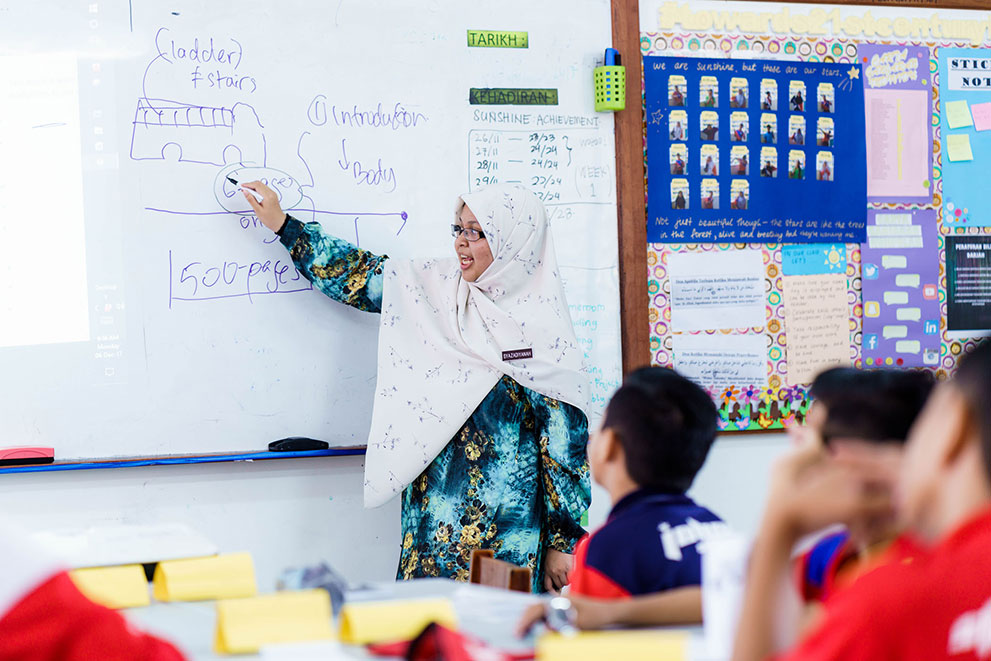 Along with the implementation of DLP at national primary and secondary schools, there is also the High Immersive Programme (HIP) where English is used widely in an encouraging environment for students to practice their English implemented early last year in all schools throughout the country.

Although DLP is optional, as it is a parents' option, according to the Education Act 1996, apart from other conditions that must be met, here's the top 4 criteria that the school must meet in order to successfully implement DLP in their school: 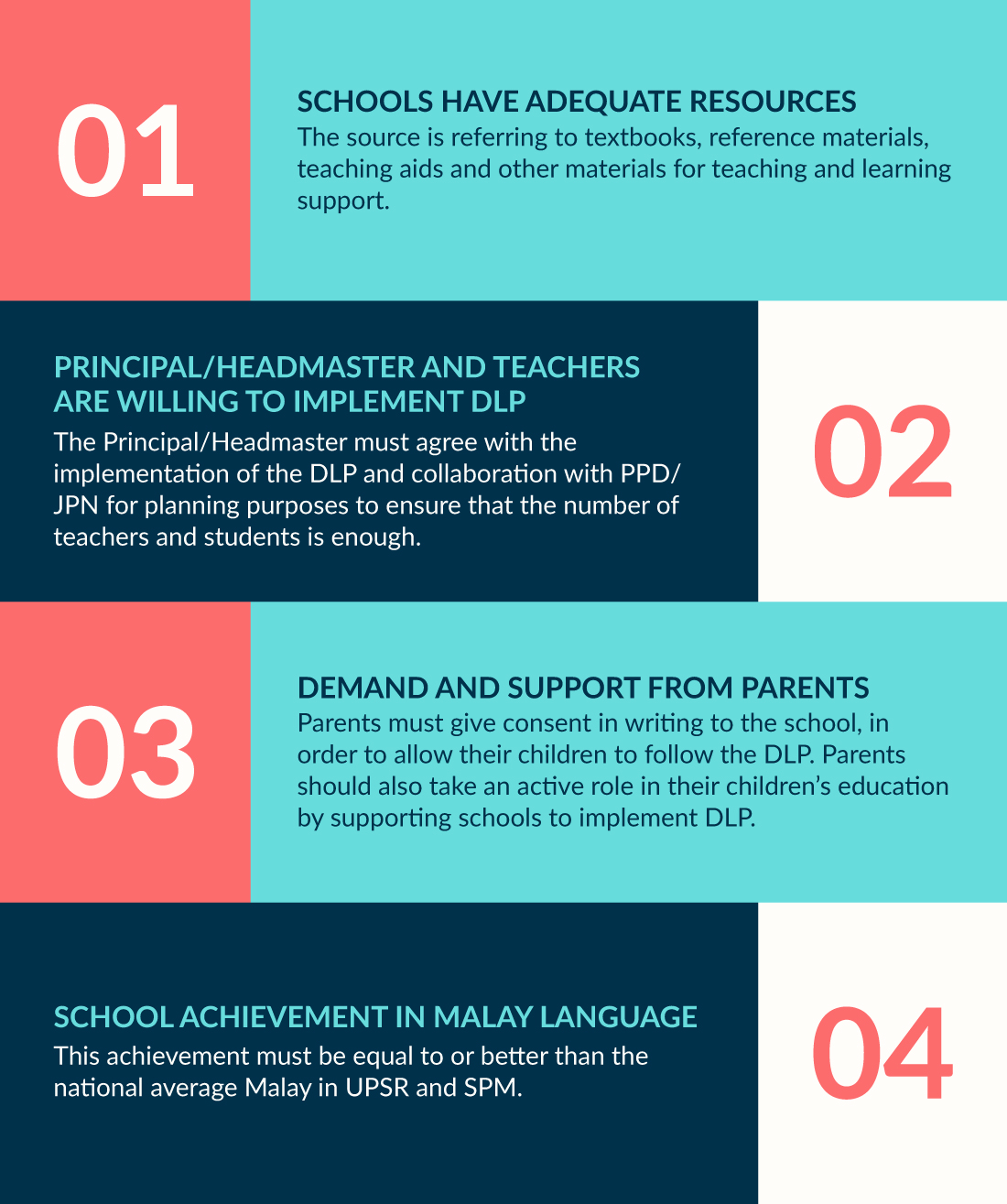 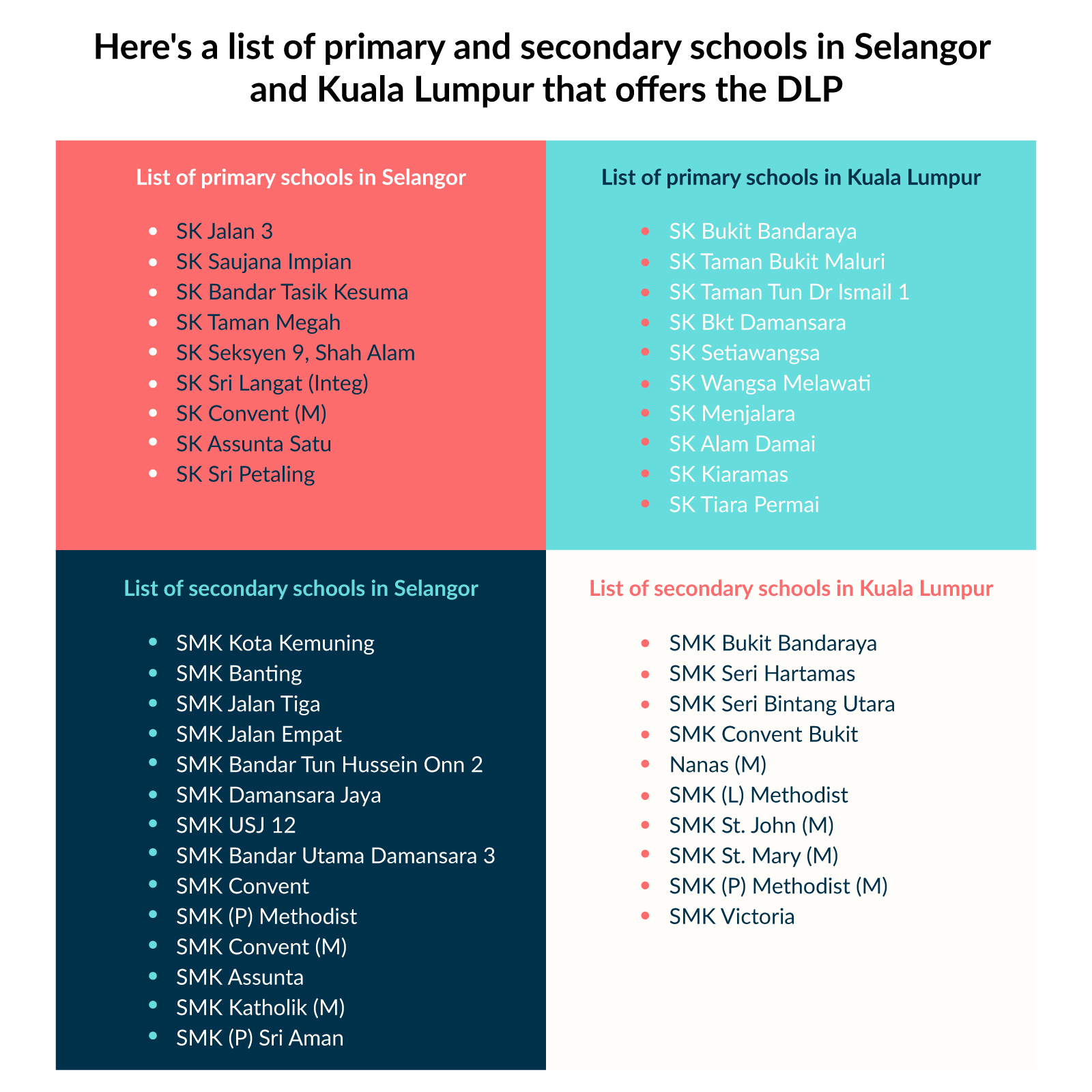 How successful has the programme been?

According to former Education Director-General Datuk Seri Dr Khair Mohamad Yusof, since the programme was implemented, the response he had received from teachers was to get continuous support from the ministry on how they can get the desired pedagogy, especially in English Language as the programme is conducted in that language.

Dr Annuar Rapa’ee, Assistant Minister of Education, Science and Technological Research, sees this programme as a route for Sarawak to move forward in its development and therefore asserts that the state will continue to commence the implementation of Dual Language Programme in 2020.

Meanwhile, the honorary secretary of Parent Action Group for Education Malaysia (PAGE), Tunku Munawirah Putra says in a statement, “The current Dual Language Programme should be given due recognition — this is where the students in some schools are given the option to study science and mathematics in English — which shows a positive trend of success. The DLP works better for the students because they are more receptive to being taught in English. Moreover, the teachers are better prepared and equipped to teach them.”

But wait! The programme has also received backlash from activists, academicians and the general public. 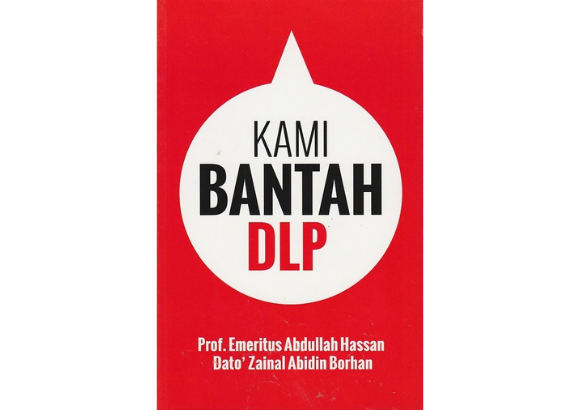 Prof. Emeritus Dr. Shaharir Mohd Zain, chairman of the Movement to Abolish PPSMI (Pengajaran dan Pembelajaran Sains dan Matematik Dalam Bahasa Inggeris) thinks with the launch of the DLP, just like with the PPSMI, will eventually neglect the Malay language. He adds, "If the language is neglected, then of course Malay culture is at risk."

NGOs and Tamil language activists also claim that the Tamil language education will suffer if English is used to teach those subjects. But as maintained by former Deputy Education Minister, Datuk P. Kamalanathan, DLP is not forced upon any student or any school.

The recent issue in regards to a teacher going live on a newly launched education channel, DidikTV KPM explaining the reproductive system for Science subject in poor English has raised the question of the progress and effectiveness of the implementation of Dual Language Programme.

Following the incident, Tunku Munawirah Putra asks if this is a sabotage of the education ministry’s intention of improving the standard of English and the Dual Language Programme.

She believes the effects of improper execution of this programme will be on the children who may not be able to fully see the purpose of the Dual Language Programme.

Meanwhile, private schools that follow the national curriculum have also been recognised to implement the programme. 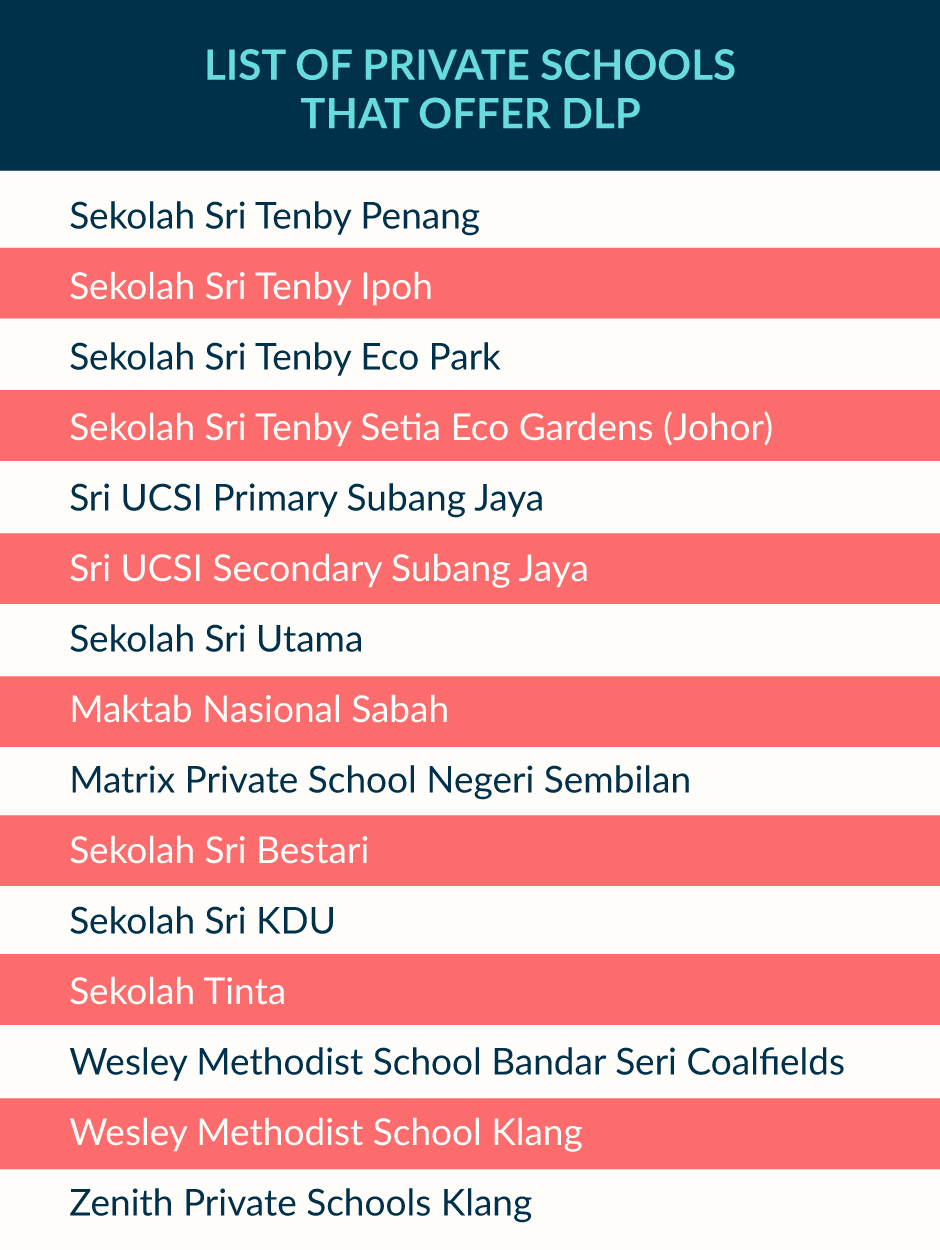 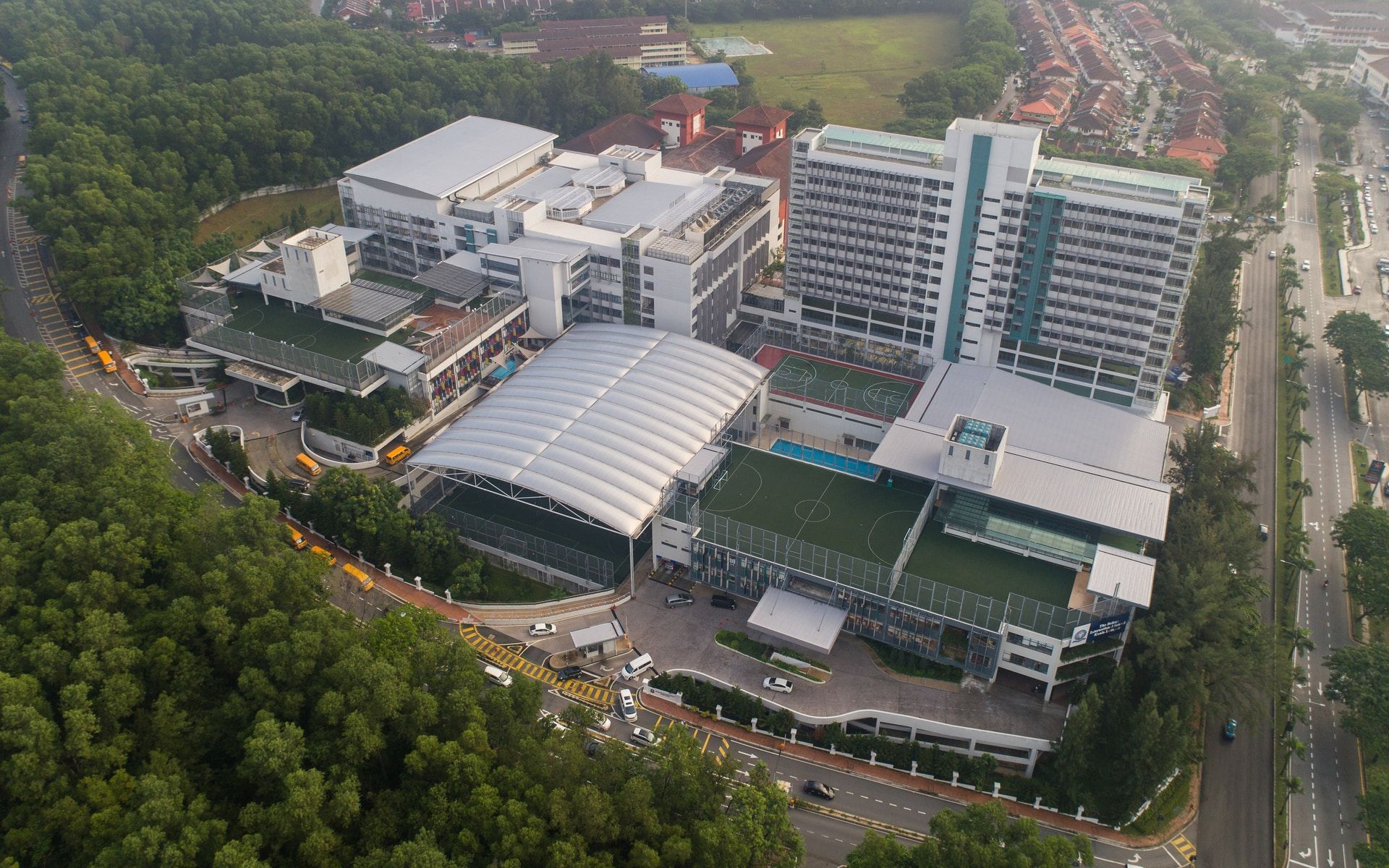 Among the top featured international schools in Kuala Lumpur is ISKL. International School of Kuala Lumpur (ISKL) offers a variety of additional languages such as Bahasa Malaysia, Mandarin, French and Spanish. Students will be given an assessment upon registration to determine their level of proficiency and then, will be placed in a second language class accordingly. The classes are offered twice a week with progressive assessments to gauge students' understanding and mastery of the language. Taylor's International School is another top featured school in the KL area. Like ISKL, the school offers Mandarin twice a week. The language classes are divided into three categories; basic, intermediate and advanced.

This is the perfect way for international schools to blend the best of both eastern and the western education. Parents can now be assured that an international education will not affect a child's mastery of the mother tongue.